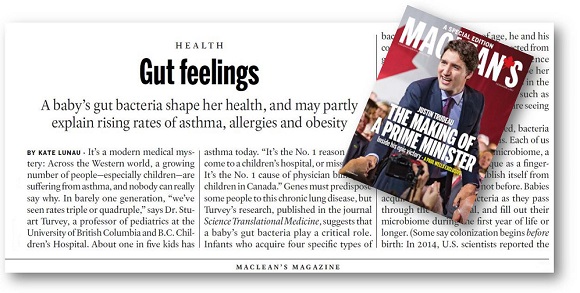 The feature article “Gut feelings: A baby’s gut bacteria shape her health, and may partly explain rising rates of asthma, allergies and obesity” highlights two new studies that point to the importance of the first three months of life in shaping the gut microbiome—a “critical window” that may lead to health effects down the road.

Dr. Turvey’s research found that four types of gut bacteria play a critical role in the first 100 days of life in protecting children against asthma. The study was conducted with co-Principal Investigator Dr. Brett Finlay and colleagues at The University of British Columbia and BC Children’s Hospital, and involved the participation of more than 300 families from the CHILD Study. Published in Science Translational Medicine, it is the first research to establish a causal link between infant gut bacteria and the development of asthma.

Dr. Kozyrskyj’s research, published with co-Principal Investigator Dr. James Scott (University of Toronto) in BJOG: An International Journal of Obstetrics and Gynaecology, used data collected at the same age from almost 200 children participating in the CHILD Study. It found that infants of Canadian women who received antibiotics during labour for a positive vaginal culture for Group B Streptococcus (GBS) or cesarean delivery were more likely to be depleted of microbes essential for normal immune function. Breastfeeding modified some of these effects when infants were 12 months old.

Maclean’s is a Canadian weekly news magazine, reporting on stories at home and around the world that matter to Canadians.

Starting in 7 min: tune in live or catch the recording later from @CIFAR_News

Happy birthday @canlung!
Thank you for supporting me as an Early Career Researcher. The ERLI Awaed was my first major grant - it funded the #humanmilk microbiome research that has launched so many exciting projects in my lab and the @CHILDSTUDY! https://twitter.com/canlung/status/1307831994680782848

@MeghanAzad Research Scientist at the Children’s Hospital Research Institute of Manitoba, tells us about how @canlung supported in her research. One of the many contributions to lung health over the past 120 years. http://www.lung.ca/CLATurns120