Breastfeeding may protect against wheezing & asthma

A study of over 2,700 Canadian mothers and infants has shown that babies who are breastfed longer are less likely to wheeze, putting them at lower risk for asthma later on.

For babies born to mothers with asthma, the protective effect of breastfeeding is even more pronounced.

Wheezing (a whistling sound in the chest) is one of the most common reasons why infants are hospitalized or need medical care, and is associated with a higher risk of childhood asthma.

PROTECTION EVEN BETTER FOR HIGH-RISK BABIES

The study, published in the European Respiratory Journal in 2017, found that at three months of age, infants who were exclusively breastfed had a 26% reduced rate of wheezing compared to infants who were not breastfed.

Breastfeeding was similarly protective at six months of age, and at one year, infants who were still being breastfed had a 33% reduced rate of wheezing compared to those who breastfed for less than six months.

“For babies who are at high risk for developing asthma because their mothers have the condition, breastfeeding was especially beneficial,” says lead author Dr. Meghan Azad (University of Manitoba).

“Among these high-risk babies, those who were exclusively breastfed for six months had a 62% reduced rate of wheezing compared to those who were not breastfed—which is very significant.”

The study’s findings strengthen existing evidence about the benefits of breastfeeding, identify new maternal and infant factors associated with breastfeeding and wheezing, and contribute new evidence regarding the introduction of complementary foods.

Currently, the World Health Organization (WHO) recommends exclusive breastfeeding for six months to achieve optimal infant growth and development, yet there is emerging evidence that earlier introduction of certain complementary foods may reduce the risk of allergic disease.

“We found that the benefits of exclusive breastfeeding were diminished by supplementation with infant formula before six months of age, but not by the introduction of complementary foods,” says Dr. Azad.

“This was an interesting result that may help to inform infant feeding guidelines and guide further research on the bioactive properties of human milk.”

The research also showed that infants were less likely to be breastfed if their mothers were younger, smoked, or had not finished post-secondary education, suggesting that these mothers and their children could especially benefit from programs to support breastfeeding.

“Given the substantial health and economic burden imposed by infant wheezing and the potential for these children to develop asthma down the road, our results support the endorsement of breastfeeding as a cost-effective strategy to prevent infant wheezing and promote lifelong respiratory health,” says Dr. Azad. 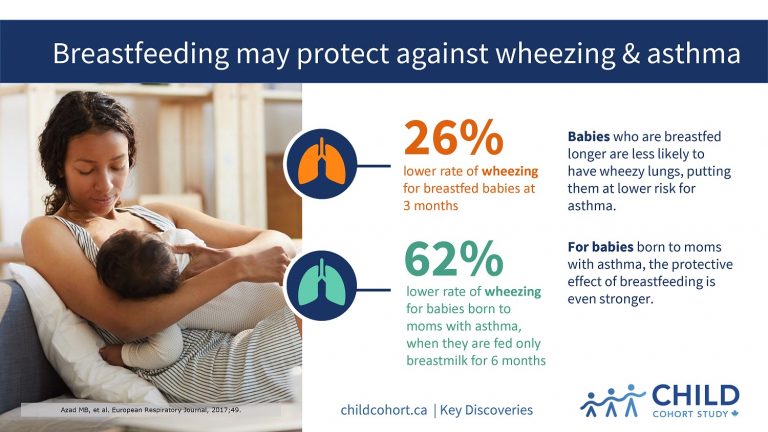 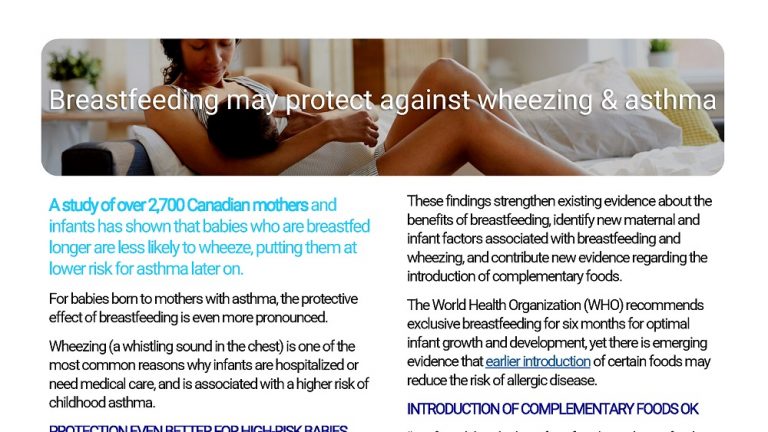 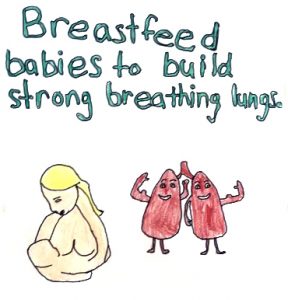 ‘Direct’ breastfeeding may
protect against asthma