(Hamilton, ON) A team of researchers working with the CHILD Cohort Study (CHILD) has developed a simple new symptom-based screening tool that detects asthma risk in children as young as two years of age.

The efficacy of the tool—the CHILDhood Asthma Risk Tool, or CHART—is detailed in a study published in the highly influential Journal of the American Medical Association (JAMA).

“Asthma affects nearly 330 million people worldwide, carries a heavy healthcare cost, and is the leading cause of hospitalization among kids in Canada—especially kids under five,” comments co-senior author Dr. Padmaja Subbarao, who is a respirologist and CRC Tier 1 Chair in Pediatric Asthma and Lung health at The Hospital for Sick Children (SickKids) and the Director of CHILD. She also a Professor in the Department of Pediatrics at the University of Toronto and an Adjunct Professor in Respirology and Medicine at McMaster University.

“Earlier detection of this condition will allow doctors to treat kids sooner, so they will suffer less and avoid going to the hospital, thus also lowering costs to the healthcare system.”

“One reason asthma often goes undetected in young children is because most conventional asthma tests are difficult to perform in children, time consuming and invasive, involving skin pricks and blood-taking, so many patients and doctors choose to avoid them,” notes the study’s co-first author, Myrtha E Reyna-Vargas, who is an M.Sc. and a biostatistician at SickKids. “Other conventional tests can also require appointments with specialists and the use of specialized equipment to test lung function, with associated costs.”

CHART categorizes children’s risk of future asthma and persistent symptoms as ‘High,’ ‘Moderate’ or ‘Low,’ based on information reported before age three. The tool recommends follow-up actions for each group.

“The beauty of CHART, the new tool we have developed, is that it can be used by family doctors or nurses in a low-resource primary care setting. It is non-invasive; it can be done on-the-spot and in-the-moment; it is cost-free and it requires no special equipment. Now that we have shown CHART’s benefits in the CHILD study, we are working towards validating its use prospectively in clinical practice.”

In the study, CHART was applied to data from 2,354 children participating in CHILD, a longitudinal research study launched in 2008 that has been following the physical, social and cognitive development of nearly 3,500 Canadian children from before birth.

From information about the children’s wheezing and coughing episodes, use of asthma medications, and related hospital visits at three years of age, CHART was able to predict with 91% accuracy which of these kids would have persistent wheeze—a key indicator of asthma—by age five.

Of those children evaluated by CHART to be at high risk of asthma at age three, 50% were diagnosed by in-study physicians as having asthma by five years of age. “We believe the tool is actually even more accurate at predicting asthma than this number suggests,” adds Dr. Malcolm Sears, co-senior author of the study, professor emeritus at McMaster University, and CHILD’s Founding Director.

“Because of various ambiguities in the way asthma is clinically defined, it is likely that a number of these young kids have asthma that remains formally undiagnosed. And regardless of an official asthma diagnosis, persistent wheeze symptoms have been linked to lower lung function, chronic lung disease, and the same kind of health care utilization as asthma; persistent wheeze also requires similar monitoring and treatment, so the value of the tool’s predictive capacity is unquestionable.”

Overall, CHART was found to be more accurate at predicting persistent wheeze, asthma, and related health care usage than other standard diagnostic methods, including physician assessments and the conventional asthma test known as the modified Asthma Predictive Index (mAPI).

The study’s findings using CHILD data were also validated by testing CHART’s performance against data from two additional cohort studies: the Canadian CAPPS Cohort, whose participants are all at high risk of asthma, and the Australian general population Raine Study. Not only did CHART also perform well within these cohorts, but—thanks to data available through the CAPPS Cohort—it was shown to be effective when applied to data from children as young as two years of age.

“We designed CHART to be a pragmatic screening tool for the use of busy primary care givers,” says the study’s co-first author Ruixue (Vera) Dai, an M.Sc. and a biostatistician at SickKids.

“With information that can be easily gathered, CHART could be incorporated into electronic medical records as a routine assessment. These kids can then be evaluated more closely, their conditions treated and managed better, and many hospitalizations can be avoided.”

“To our knowledge, this is the first study to develop a non-invasive tool for early detection of asthma and persistent wheeze in a general population, and that has subsequently been validated in general and high-risk cohorts.”

See the Key Discovery profile for this finding. 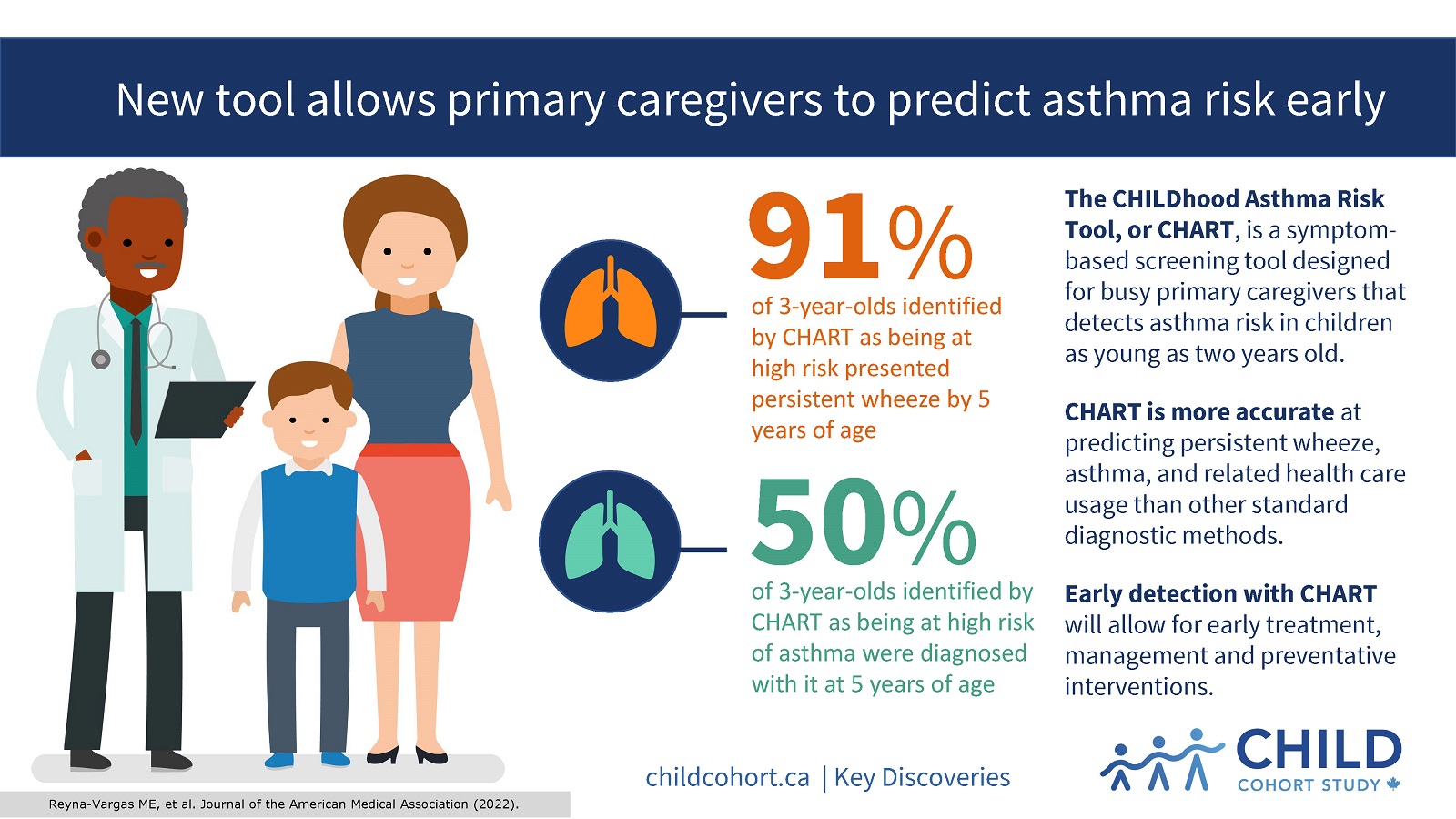 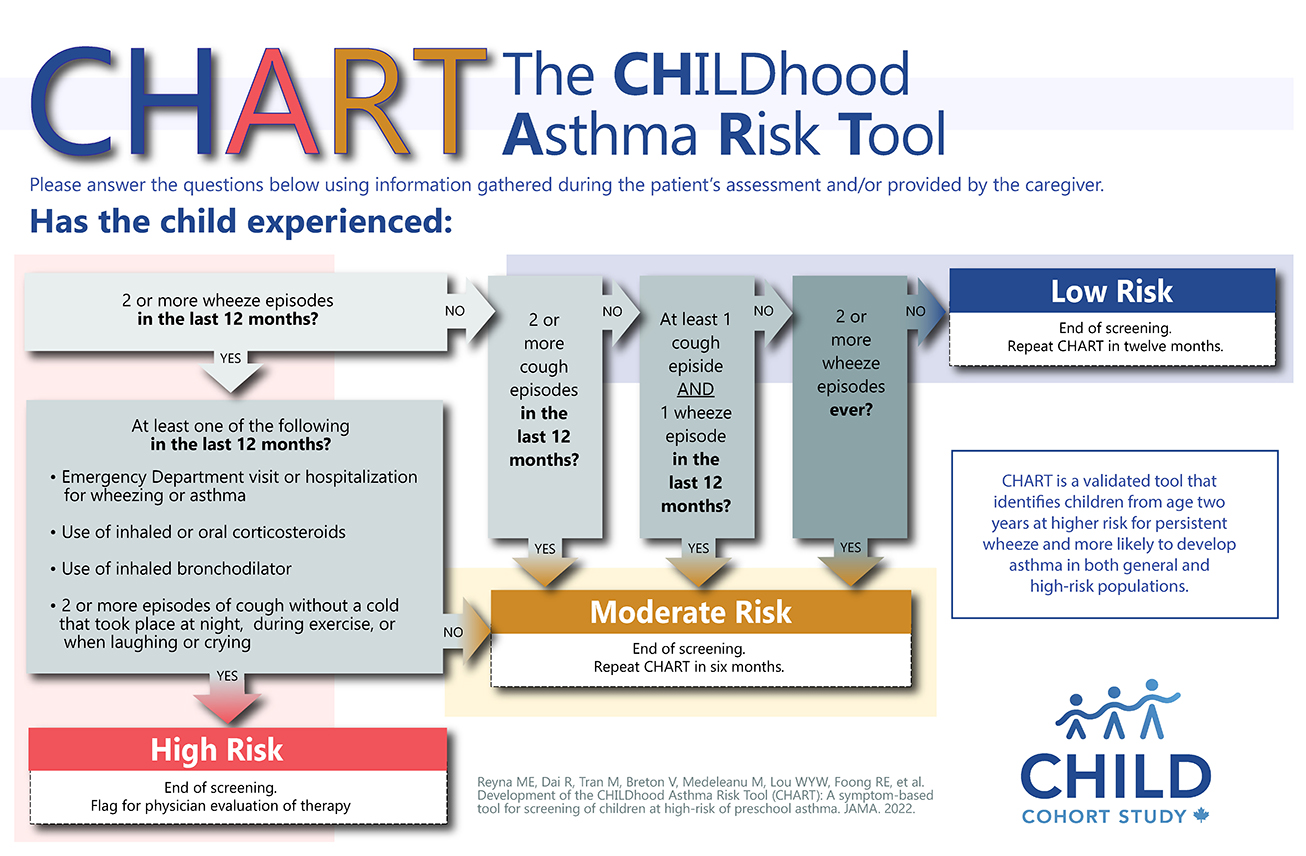