Stress in pregnancy may affect a baby’s immune system

A mother’s distress during or after pregnancy may affect the maturation of her infant’s immune system, according to new findings from the CHILD Study. The research, published online this week in Brain, Behavior and Immunity, found that infants born to mothers with pre- and postnatal depression had reduced levels of an important immune antibody in their feces in the first few months of life.

The findings shed new light on the stress-microbiome-immunity pathway in humans and suggest that infants born to mothers experiencing distress may be at a higher risk of developing allergic disease.

“Given the emerging research linking the gut microbiome and allergies, we were interested to\ see if maternal depression, which is not uncommon in our increasingly stressful environment, plays a role in an infant’s early life gut immunity,” says lead researcher Dr. Anita Kozyrskyj, an AllerGen investigator and a professor in the Department of Pediatrics at the University of Alberta.

“We found that when mothers were depressed during and after pregnancy, their infants were more likely to have reduced concentrations of secretory immunoglobulin A (sIgA), a critical immune antibody, in their gut as compared to infants whose mothers were not depressed.”

The sIgA antibody is thought to play a critical role in reducing the risk of allergic disease by helping an infant’s developing immune system to recognize the difference between harmful and harmless substances in the gut.

For their study, the researchers analyzed data from 403 infants and their mothers participating in AllerGen’s CHILD Study—a national birth cohort study collecting a wide range of health, lifestyle, genetic and environmental exposure information from 3,500 children and their families from pregnancy to school age.

Because sIgA is passed from moms to infants through breastmilk, the researchers also examined the impact of breastfeeding on sIgA levels. “We wondered if maternal distress affected breastfeeding, which might explain the lower sIgA levels seen in some infants,” says AllerGen trainee and study first-author Liane Kang, also at the University of Alberta.

“However, we found that even with exclusive breastfeeding, infants of mothers with prenatal depression had slightly lower sIgA concentrations, and infants of mothers with both pre- and post-natal depression were three times as likely to have reduced fecal sIgA levels, which suggests that maternal distress is associated with infant sIgA levels, independent of breastfeeding.”

Postnatal depression did not have a unique contribution to sIgA levels when breastfeeding status was considered.

Data from the CHILD Study will enable continued research in this area, according to the research team. “Our findings suggest that programs and policies to support the psychosocial wellbeing of mothers during and after pregnancy are important in shaping the immune health of newborns,” adds Dr. Kozyrskyj.

“CHILD is helping us to identify critical early-life windows for disease interception. Our hope is that our findings will guide future research to better understand how maternal stress impacts sIgA, a vital component in the first-line defense of a baby’s developing immune system.” 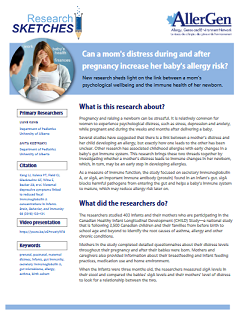