CHILD research suggests that children may reap the health benefits of fruit even before birth.

Dr. Piush Mandhane (University of Alberta), leader of CHILD’s Edmonton site, analyzed data from nearly 700 mothers and children involved in CHILD, and found that mothers who consumed more fruit during pregnancy gave birth to children who performed better on developmental testing at one year of age.

“We wanted to know if we could identify prenatal and postnatal factors that affect cognitive development,” says Dr. Mandhane.

“We found that one of the biggest predictors was how much fruit a mother consumed during pregnancy.”

Babies born to mothers who consumed six or more servings of fruit per day during pregnancy scored six or seven points higher on an infant development scale at age one compared to babies whose mothers ate less than one serving of fruit.

“It’s quite a substantial difference – that’s half of a standard deviation,” notes Dr. Mandhane.

The research team also looked into the specific nutrients the mothers consumed as part of their fruit intake. Two “stars” emerged: lycopene – a natural pigment that gives fruits and vegetables, such as tomatoes, grapefruit and watermelon their red colour – and fructose, the natural sugar found in most fruit and vegetables.

JUICE DOESN’T DO IT

Published in EBioMedicine in June 2016, the research puts a new spin on nutrition during pregnancy: the results suggest that it’s not just the nutrients that count, but their source.

“Fruit juice did not have the same beneficial effect on infant development,” says Dr. Mandhane, “nor did prenatal consumption of vegetables.”

The gestational age of the child at birth also highlighted the effect: the earlier a child was born, the more obvious the “fruit factor.”

In women who gave birth to preterm children, “having one extra serving of fruit per day gave the baby the same benefit as being born a whole week later,” Dr. Mandhane explains. “That’s a meaningful advantage.”

National and international news outlets, including CBC, Good Housekeeping, The Wall Street Journal, and the UK’s The Telegraph, reported the findings.

While the results suggest the more fruit the better, the researchers caution that their study did not consider potential complications of increasing natural sugar intake, such as gestational diabetes and high birthweight.

To further build on the CHILD discovery, Dr. Mandhane collaborated with Dr. Francois Bolduc (University of Alberta), who showed that flies born after being fed increased prenatal fruit had significantly better memory ability, similar to the results shown by Dr. Mandhane with one-year-old infants.

The researchers believe that this finding suggests that brain function affected by fruit and the mechanisms involved have been maintained through evolution and conserved across species.

“Our future research will investigate whether the benefits of prenatal fruit consumption persist in children over time,” says Dr. Mandhane.

“At age three, we can test a child’s higher cognitive functions like planning and multitasking.”

If prenatal fruit boosts these functions, “there may be a real benefit to promoting greater fruit intake during pregnancy, particularly if we can improve outcomes for premature babies, who are at higher risk of intellectual delays.” 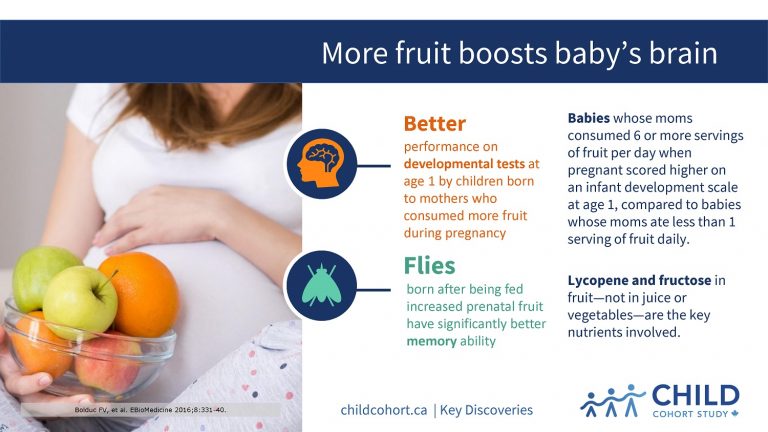 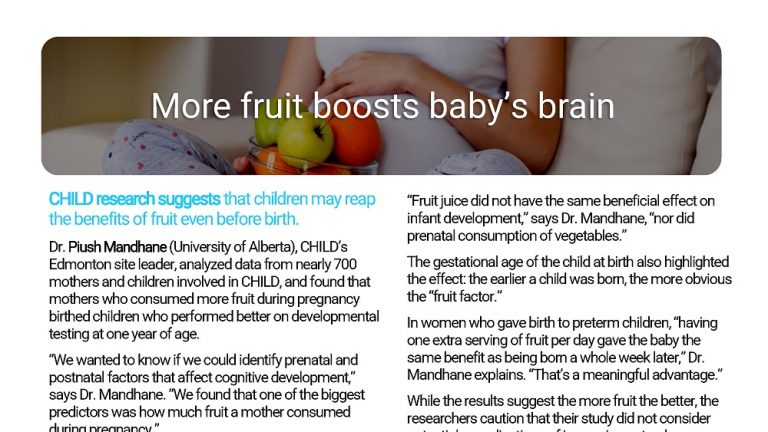 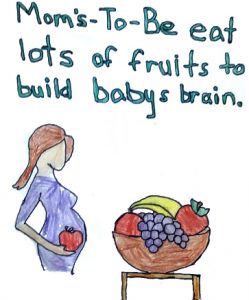 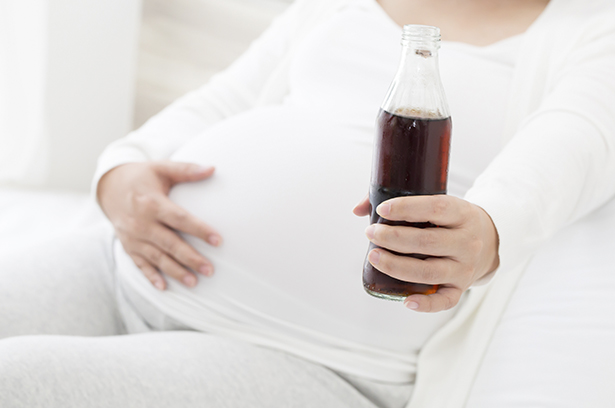