In May 2016, CHILD published the first human evidence that exposure to artificial sweeteners in utero influences body mass index (BMI) in the first year of life and may contribute to the development of early childhood overweight.

Dr. Meghan Azad (University of Manitoba) led the research, which was published in JAMA Pediatrics and reported around the world, including through stories in TIME, The New York Times and Cosmopolitan.

“Typically, we think of sugar as the ‘bad guy,’” says Dr. Azad, who is Deputy Director of CHILD and former co-leader of the Study’s Manitoba site.

“It turns out that replacing sugar with artificial sweeteners in pop, or even in coffee and tea, may not be such a good idea. If a mom consumes diet drinks on a daily basis during her pregnancy, it could have an impact on her baby’s weight.”

As part of the study, over 3,000 expectant mothers participating in CHILD answered questions about what they ate and drank during pregnancy, and their babies were studied a year after birth.

Moms who reported consuming one or more artificially sweetened beverages (ASB) per day during pregnancy were twice as likely to have children that were overweight or obese at one year, compared to women who avoided these beverages.

ASB consumption in pregnancy appeared to have no effect on the infants’ weight at birth.

“This suggests that a mom’s ASB consumption likely influences her baby’s weight gain after birth, rather than during fetal growth,” says Dr. Azad.

“This association persisted whether the artificial sweeteners came from soft drinks, coffee or tea.”

The findings do not suggest that artificial sweeteners cause obesity in children, according to Dr. Azad, but they do support previous research that found similar links between sugar substitutes and health issues, including weight gain, in animal and human studies. 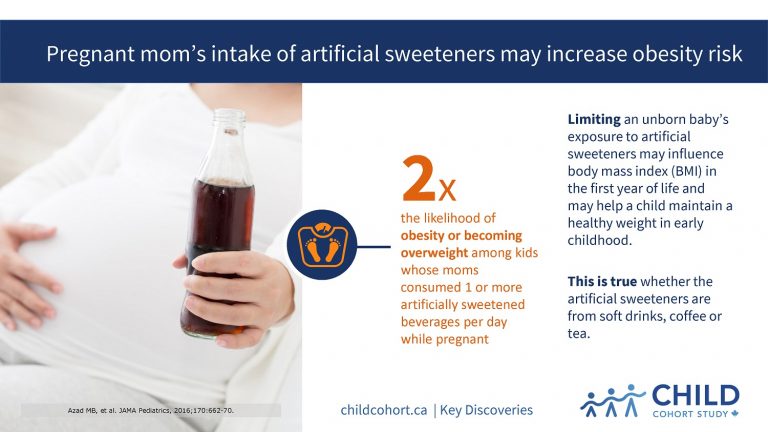 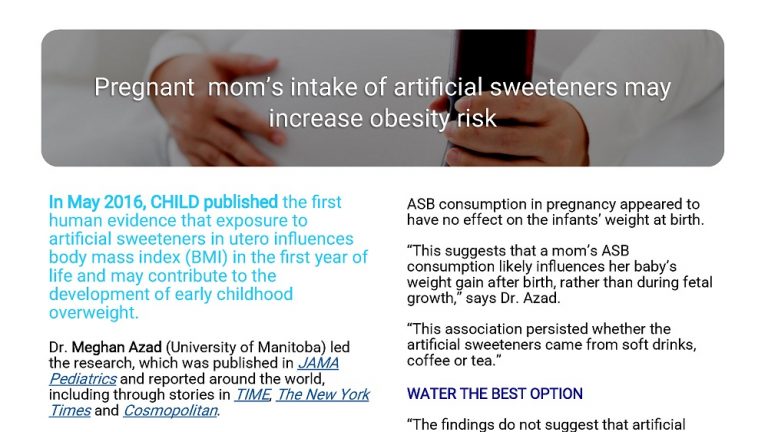