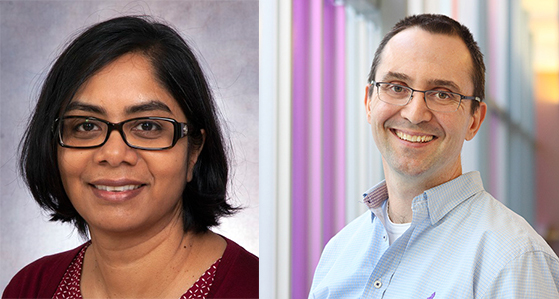 On July 1, 2017, Dr. Padmaja Subbarao became the Director of the CHILD Study and Dr. Stuart Turvey the Study’s Co-Director.

“Without Malcolm, there would be no CHILD Study,” comments Dr. Subbarao.

“It was Malcolm’s vision that led to the creation of CHILD. It was his strong sense of collaboration and unity that brought together a diverse group of scientists across the country to work towards a common goal of exploring the root origins of asthma, forming a strong base upon which to build our understanding of the developmental origins of chronic diseases.

“Those concerned with children’s health in Canada owe him a debt of gratitude, and I am deeply honoured to follow in his footsteps.”

Dr. Sears brought to CHILD many years of experience with studies investigating the epidemiology and natural history of asthma, including his involvement for more than 30 years in the celebrated Dunedin Study in New Zealand. He led the planning for the CHILD Study from initial discussions in 2004 and served as its Director from its inception in 2007 through to July 2017. He remains involved in the CHILD Study, especially in the reviewing and editing of publications, and maintains an advisory role as a member of the Executive Committee.

Dr. Subbarao, a paediatric respirologist and an associate professor at The Hospital for Sick Children, McMaster University and the University of Toronto, has been the Toronto site leader of the Study since its inception, and was previously its Co-Director.

Dr. Turvey, a pediatric immunologist at BC Children’s Hospital and a professor at The University of British Columbia, is also the Study’s Vancouver site leader.

Read Dr. Sears’ Founding Director’s Letter to CHILD families on the occasion of “passing the baton” to Dr. Subbarao.